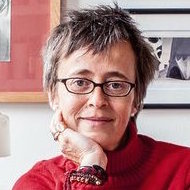 Francis Stonor Saunders is a journalist and historian, the author of bestselling titles such as Hawkwood and Who Paid the Piper?, a cultural history of the Cold War. Saunders was the arts editor and an associate editor of the New Statesman for many years and continues to contribute to national media titles including the Guardian. As a filmmaker, her television documentaries included Hidden Hands: A Different History of Modernism and Who Paid the Piper?: CIA and the Cultural Cold War, formed the basis of her later written works.